Here & There in the Wine World 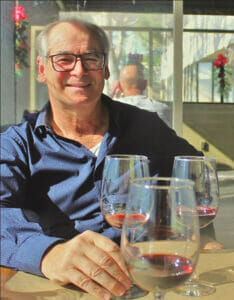 By Frank Mangio,  About this time of year, we like to gather a small group of press facts and opinions still in the in-box.  I have a hunch that most of you would rather end 2020 now, than go through another few more nightmare weeks of a year when civilization as we know it was being tested like never before. It’s been reported that creative people that produce family Christmas cards and letters with photos and activities from the past year are displaying masks, sanitizers and toilet paper trees in place of favorite moments. The only symbol that leaves me with hope is that a significant number showed wine images.  Wine sales on the internet are up 80% year over year.
Paolo Paoloni of Montefiori Winery in the Guadalupe Valley of Baja Mexico presented his newest wines in a novel way.  An Italian winemaker, he journeyed to Guadalupe and began making wine from Italian varietals in 1998 where he still offers Sangiovese, Aglianico and Nebbiolo wines at a fraction of the cost of these wines in Italy and the U.S.
But he laments not being able to convince the U.S. market that there is little difference between the imports from Italy and his wines.
So he staged a blind tasting between a well-known 2014 Italian Brunello (with premium Sangiovese basics) and his 2013 Sangiovese Grosso.
There were minor differences in the results for each.  The Brunello scored for an elegant, silky look and bouquet.  The Paoloni Sangiovese was more energetic in its berry flavor and toasted spices. Both matured in French oak and showcased the Italian sense of place, even though each was made half a world apart. Villa Montefiori lived up to its affectionate phrase “Mexican Wines with an Italian Heart. “  Learn more at villamontefiori.mx.
Stella Rosa is the Italian wine division of San Antonio wines of Los Angeles.  It was founded in 1917 in Northern Italy to provide award-winning sparkling Italian wines. Their latest release is a Stella Rosa Golden Honey Peach, a refreshing white with flavors of honey and peach that’s served chilled with fresh fruit, cheese, spicy cuisine and desserts.
What makes this fascinating is the back label that has the complete Nutritional Facts for this wine.  The largest, can’t miss number, is the Calorie amount per serving.  A serving of wine is documented as 5 ounces per container and this content is stated as 100 calories. A bottle of this size is 25 ounces, so expect 500 calories per bottle, if you’re counting.
Total sugar is 13 grams, or 12% of the bottle’s contents. This is a “sweet” wine and would reflect that higher sugar presence. This wine is new and I would estimate its cost, based on a similar Stella Rosa brand, at $10.95.
See stellarosa.com.
The talk around Napa Valley after the recent Glass Fire did its damage is the extent of that damage to future wine production.  The whisper around the vineyards is that “smoke taint” is a permanent defect to the 2020 Napa and Sonoma vintage when it hits the market a couple of years from now. The harvest is normally a happy time for winemakers, but this time they’ll be mulling the difficult decision of which ones go to bulk for many uses beside drinking, and which will survive, representing the sophisticated, elegant wines that we have come to love.  2018 and 2019 production was so big in Napa, flooding the marketplace, that comments can be heard that this current 2020 harvest, after the fire hit the vineyards running on September 29th, should be left on the properties. This makes sense to me.  Those grapes from vineyards that were not hit and the grapes from vineyards that were picked and processed prior to getting hit by fire, could be sold with a “no smoke taint” guarantee. At least some sense of the wine history of 2020 will then be preserved.
Wine Spectator, the largest circulated readership in the world for the wine industry, will began their countdown to the Top 100 wines in world for 2020, Monday December 7th.  TASTE OF WINE & FOOD will bring you the results of The Top Ten from Spectator as well as its own Top Ten before the year ends.  You don’t want to miss a bottle.

Click here or the image to open the FBN form.

For more information regarding all legal notices and instructions, please visit our Legal Notice Help Page.

Uncategorized  Here & There in the Wine World