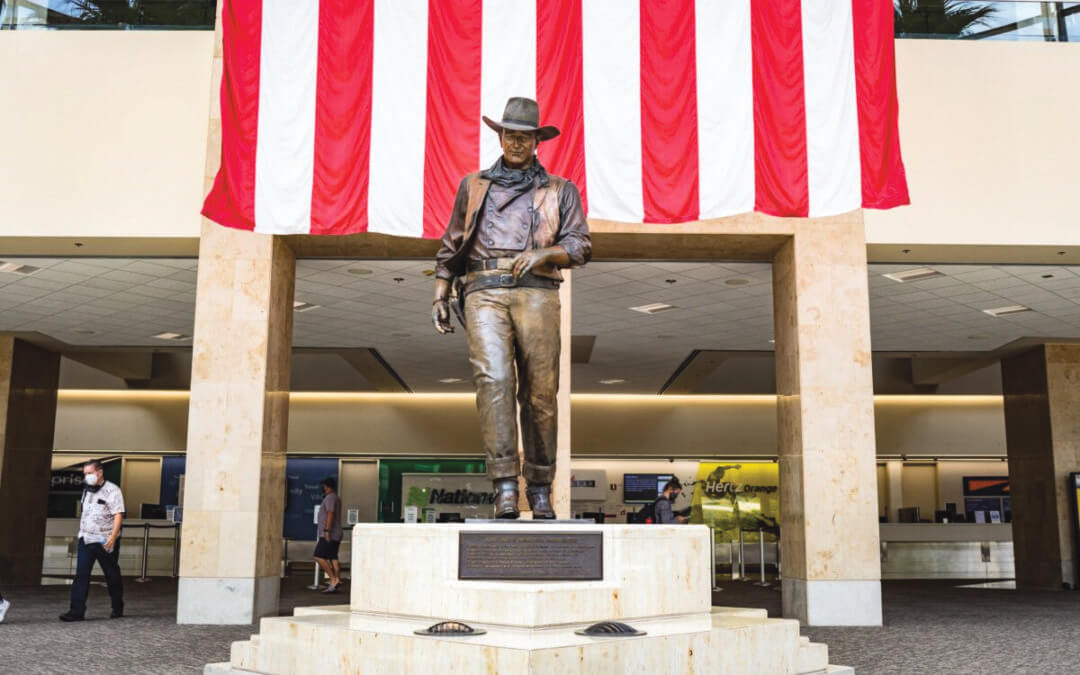 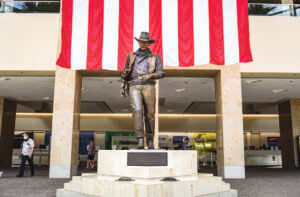 Democratic Party of Orange County Chairperson Ada Briseno is attributed to be the party who drafted a petition to the Orange County Board of Supervisors to remove a statue of John Wayne and change the name of the Orange County Airport.
Ada Briceño is a million laughs. Her associates say that she is both funny and cheerful enough to be a comedienne. Now the Orange County Board of Supervisors will get a chance to chuckle over her latest humorous effort. Her petition to the Orange County Board of Supervisors to remove a statue of John Wayne and change the name of the Orange County Airport will almost certainly draw either slight smiles or loud peals of laughter from the County Supervisors, nearly all of whom are Republicans.
Staff assistants to the Board of Supervisors say that while the petition appears to have been written in fairly serious language, the proposed action has only two chances to succeed: Slim and None. Orange County Supervisor Don Wagner was recently quoted as saying similar petitions “pop up periodically”, but “Don’t have legs” with Orange County residents
Renaming an International Airport would cost tens of millions of dollars. Almost all of the airlines and other businesses in and around the airport would also have to change their business names and peripheral paperwork such as printed schedules, ticketing documents, signs and directionals including traffic signs for all adjacent streets and freeways. Multiply that by the number of other cities throughout the United States and over the world whose destinations would normally include the name of the airport and you can get a glimpse of the financial Tsunami such a change would entail.
Briseno, age 49, which is coincidentally 49 years ago when John Wayne’s Playboy magazine interview which reportedly contained racist and insensitive remarks was published . While Briseno would have been too young to be a Playboy magazine subscriber or reader, her petition relies on that antiquated publication. It is widely recognized that most of the adult subscribers of that publication buy it for its’ celebrated photographic pictorials or reasons other than political guidance.
John Wayne Airport (JWA) is owned and operated by the County of Orange and it is the only commercial-service airport in the county. General aviation, commercial aircraft and private jets share the airport’s runway, terminal and storage facilities.
JWA currently handles about 10.5 million passengers annually and about 126 commercial flights per day. The airport is located along the northern boundary of Newport Beach and residential and commercial properties are located directly below the airport’s primary departure pattern for commercial and general aviation aircraft.
The Federal Aviation Administration (FAA) is responsible for controlling all air traffic and flight patterns. Recently, the FAA implemented new departure patterns (see “NextGen”)  for John Wayne Airport. You may be experiencing these changes in the form of hearing and seeing aircraft for the first time around your home or the aircraft may appear to be louder or closer than in the past.
Community Partners and Corridor Cities
The Newport Beach City Council and a number of Orange County cities (known as the “Corridor Cities”) located along the airport’s arrival and departure corridors have publicly agreed to oppose:
Any expansion of JWA beyond its current physical footprint;
A second commercial runway or the extension of the existing runway;
Any significant reduction in general aviation operations / facilities, which could allow for more commercial aircraft use; and
Any detrimental change to air carrier or general aviation noise ordinances.
Newport Beach believes that the coordinated, collective efforts of local citizen groups, the Corridor Cities, and the County are essential to controlling the adverse impacts of JWA and protecting the quality of life here for this and future generations of residents. There are numerous governmental committees and community groups that meet regularly to discuss and address airport issues, including the City’s Aviation Committee. To learn more about one of the community groups, please visit the Get Involved page on the City of Newport website. www.newportbeachca.gov

Click here or the image to open the FBN form.

For more information regarding all legal notices and instructions, please visit our Legal Notice Help Page.